The Materials for Tomorrow, Today 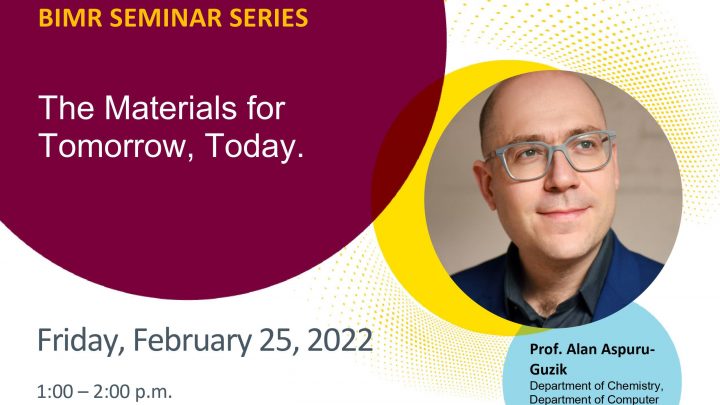 In this talk, I argue that for materials discovery, one needs to go beyond simple computational screening approaches followed by traditional experimentation. I have been working on the design and implementation of what I call “materials acceleration platforms” (MAPs). MAPs are enabled by the confluence of three disparate fields, namely artificial intelligence (AI), high-throughput quantum chemistry (HTQC), and robotics. The integration of prediction, synthesis and characterization in an AI-driven closed-loop approach promises the acceleration of materials discovery by a factor of 10, or even a 100. I will describe our efforts under the Mission Innovation umbrella platform around this topic.

Alán Aspuru-Guzik is a professor of Chemistry and Computer Science at the University of Toronto and is also the Canada 150 Research Chair in Theoretical Chemistry and a Canada CIFAR AI Chair at the Vector Institute. He is a CIFAR Lebovic Fellow in the Biologically Inspired Solar Energy program. Alán also holds a Google Industrial Research Chair in Quantum Computing. Alán is the director of the Acceleration Consortium, a University of Toronto-based strategic initiative that aims to gather researchers from industry, government and academia around pre-competitive research topics related to the lab of the future.

Alán conducts research in the interfaces of quantum information, chemistry, machine learning and chemistry. He was a pioneer in the development of algorithms and experimental implementations of quantum computers and quantum simulators dedicated to chemical systems. He has studied the role of quantum coherence in the transfer of excitonic energy in photosynthetic complexes and has accelerated the discovery by calculating organic semiconductors, organic photovoltaic energy, organic batteries and organic light-emitting diodes. He has worked on molecular representations and generative models for the automatic learning of molecular properties. Currently, Alán is interested in automation and “autonomous” chemical laboratories for accelerating scientific discovery.