Trends in materials and product design: from microstructure optimization to “architectured materials” 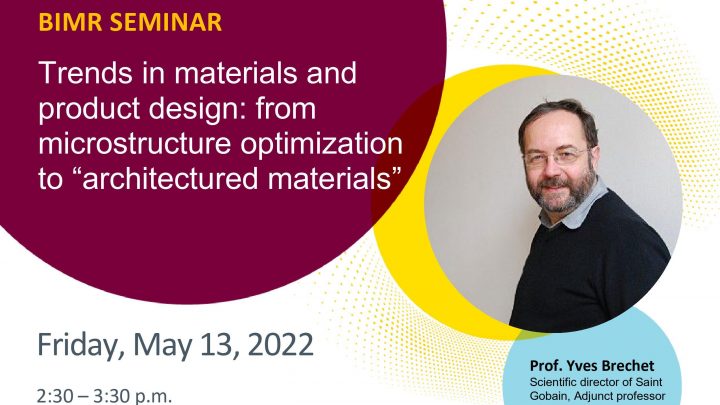 Increasing requirements on products lead both to contradictory requests on materials properties, and multifunctional objectives. The traditional way to face these issues was to taylor the microstructures. More recently, especially for functional materials, atomistic approaches have allowed to taylor compositions from first principle calculations. The aim of the presentation is to explore developments on another strategy, at the other length scale, when the materials are purposely heterogeneous at a length scale which is comparable to the dimensions of the components. These materials are called “architecture materials” and offer new routes for optimization where association of materials in prescribed geometries can “fill gaps” in materials space. Example of such materials development strategies will illustrate this concept which may contribute to a “materials by design” strategy. The difficulties to be overcome and the limitations of these approaches will be outlined.

Yves Bréchet graduated from École Polytechnique (1981), École des hautes études en sciences sociales (1992) and obtained his doctoral degree and habilitation from Joseph Fourier University in 1987 and 1992, respectively.
He has been a full professor at Grenoble INP/Phelma between 1987 and 2012, an adjunct professor of materials science and engineering at McMaster University (Canada), a senior Research Professor at the Institut Universitaire de France, and a member of the SIMaP (Materials and Processes Science and Engineering) Laboratory with the University of Grenoble.
On 30 November 2010 he was elected to the French Academy of Sciences.
He has been a member of the international scientific council of ArcelorMittal and the Commissariat à l’énergie atomique, and a scientific advisor to Rio Tinto Alcan, EDF and ONERA, as well as several editing boards of scientific journals
On 19 September 2012 he was named to the position of High Commissioner for Atomic Energy and Alternative Energies by the President of the French Republic, succeeding Catherine Cesarsky.
He resigned from this position in 2018, and is now Scientific director of Saint Gobain, while keeping a position as Distinguished Research professor at Monash university, adjunct professor at McMaster university and advisory professor at Jiaotong university. Since 2018 he has been giving a course on “Scientific analysis for political decisions” at the Ecole Nationale d’Administration. He is also president of the Scientific council of Framatome, and president of the scientific council of the non-profit “Maisons pour les Sciences” foundation for scientific education founded by Georges Charpak.

*Note, this seminar will be offered in hybrid format*